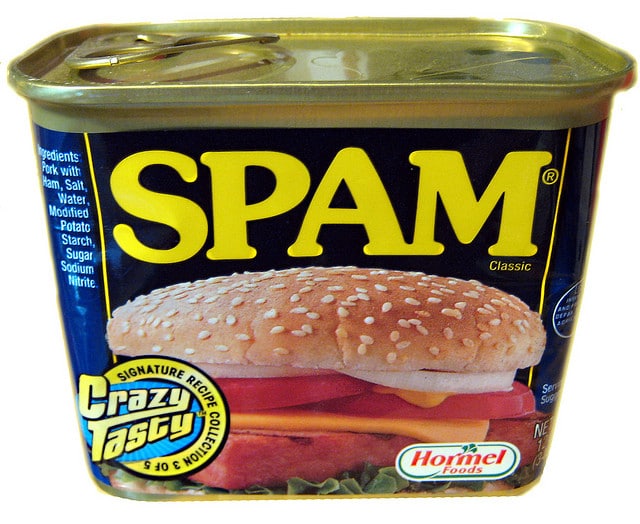 The canned meat spam (spiced ham) was immortalised in a famous Monty Python sketch which featured a couple trying to order in a cafe populated by Vikings. The couple found the menu contained nothing but spam.

How did the Word “Spam” become Known for Junk Email

There are a few explanations as to how the term spam became associated with fake (junk or illicit) e-mail messages. One theory is that because spam is jokingly referred to as fake meat it was logical to apply the term to fake e-mails. The second theory is linked to the Monty Python sketch where any attempt at a conversation by the couple using the word Spam resulted in the Vikings singing “Spam, Spam, Spam, Spam Wonderful Spam”. The second theory is reinforced by some of the very early spam e-mail messages which were accompanied with the sound file of the Monty Python Viking Spam song.

Email Spam is a menace for a number of reasons. First, the volume of mail wastes valuable bandwidth and time. It forces people to delete unwanted messages which in turn impacts their productivity. Secondly, spam is a prime mechanism for the transfer of viruses and malware. It is used by criminals to initiate complex frauds providing the foundation of a phishing attack. Finally, there is the matter of cost. Whilst it costs relatively little for a spammer to send thousands of e-mails an hour and bounce the e-mails off third party servers, the cost of receiving and managing the received e-mails is significantly higher.

The True Costs of This Type of Email

A recent study concluded that the cost to a small to medium sized business in the UK equated to a loss of more than £34,000 per year. The study analysed employees over a 30 day period noting that each employee on average received 25 unwanted e-mails per day. They concluded the time taken to deal with spam e-mails equated to almost one working day per year per employee.

Apple recently were criticised and classed as spammers for offering all iTunes customers a U2 album. Many customers said they were not U2 fans and they felt the offer was irritating and presumptuous and proved difficult to delete. Personally I would have preferred the Monty Python Sound Track of “Spam, Spam, Spam, Spam Wonderful SPAM”.

It is clear that despite the tools we now have for managing and dealing with spam, it is a problem that is not likely to disappear any time soon.

Different Types Of Hackers – And What They Mean For Your Business