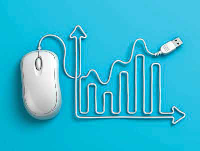 Companies are changing the way they conduct business. They are moving more of their core services on-line. There is a danger that the speed of this migration outstrips the implementation of legal, regulatory and information security controls that must be part of any on-line business project.

It is vitally important that information security is involved at the start of projects and is able to clearly articulate the value and risks involved in changing core operational business models. One challenge is that it is difficult to put a figure on the true value of the digital economy as it does not account for the value of data transactions or the value data has for different companies in different sectors.
There are reports that provide general guidance on the value, as well as providing a good indication of the trends in the market. Information security professionals can use these in discussions with executive management to support a business case for securing investment in information security. Booz & Company’s econometric analysis takes into account the global mass adoption and integration of new technologies to boost economic growth, as well as create jobs.
The report acknowledges that there are no constant patterns. However, whilst globally each economy is different, developed countries are in a far better position to invest in and adopt new technology. In addition the report also takes into account that in 2013 the global economy was sluggish.
The author’s analysis indicated that global digitization provided a US$193 billion boost to world economic output and globally created 6 million jobs in 2011. In the same year in the Middle East and North Africa alone, digitization resulted in an extra $16.5 billion in output and nearly 380,000 new jobs. Developed economies enjoy higher economic growth benefits by a factor of almost 25 percent, although they tend to lag behind emerging economies in job creation by a similar margin.

Other articles:
Where shall I stick it?
Are you Immune?
InfoSec 2014 – 29th April – 1st May (Earls Court)
Passwords have always been a challenge

Looking At ISO 27001 Certification? Guidance On How To Avoid The Cowboys